Travel to Uzbekistan on the trail of the Great Silk Road As the UN agency on World Tourism focuses on the old Silk Road to promote transnational tourism, Sujoy Dhar visits Uzbekistan, which celebrates its legacy of stunning Islamic architecture

The trail of Uzbekistan’s national hero Amir Timur (also spelt Temur) is also the trail of the ancient Silk Road, which the 8th UNWTO (UN agency for World Tourism) in Berlin in March 2018 chose as the most important transnational tourism route of the 21st century. 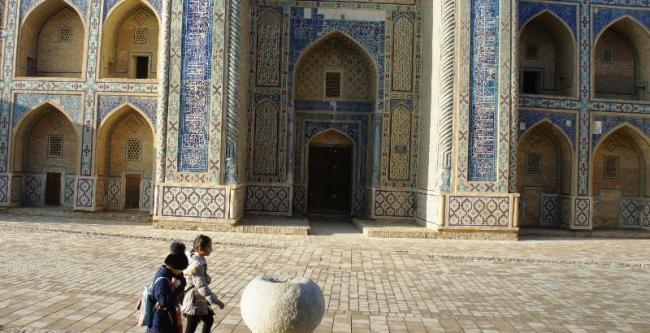 But if you are visiting Uzbekistan you initiation with history perhaps begins with a museum to the Timurids in the sprawling capital city of Tashkent.

The Museum of History of Temurids- which is called the Amir Timur Museum popularly- is a building with a blue cupola with all three floors dedicated to the rulers of Uzbekistan. Once you enter the building and before exploring the various exhibits what you confront at the centre of the main hall is a copy of the  Muslim holy book – the Koran Osman. This Koran is said to be a copy of the oldest holy book of the Muslims which is preserved in the same capital city.

This museum was built only to commemorate the 600th birthday of Timur. 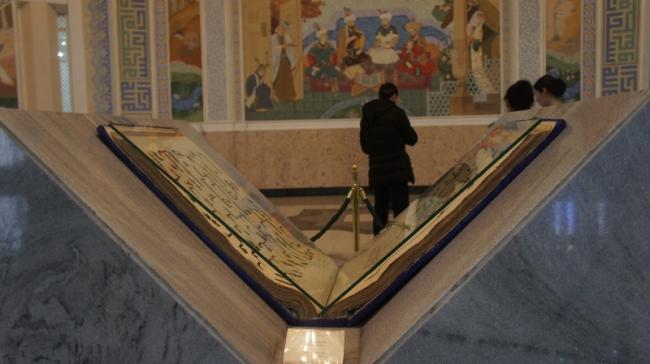 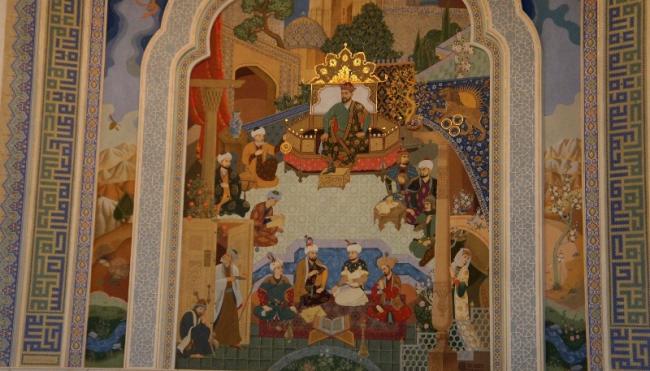 Image: The Museum of History of Temurids- which is called the Amir Timur Museum popularly- is dedicated to the great ruler. His mural on the wall and the copy of the oldest Koran are attractions

As you stand in front of the Koran admiring its display and size, you come face to face with Timur in large mural on the wall in the style of miniatures, titled “The Great Timur – the great creator.” Made by Uzbek artists, it draws you attention along with a beautiful chandelier adorning the ceiling.

The picture reflects the life of  Timur from his birth to his death. It shows a shooting star, symbolizing the translation of his name “Amir Temur” as “born under a lucky star.”

In the second part of the mural there is a creative work of the great ruler, which are the majestic buildings you see in Uzbekistan- Ak-Saray Palace in Shakhrisyabs or the Bibi Khanum in Samarkand. And third, the final part of a panel is the last stage in the life of Timur, his tomb –the Gur-e Emir, also in Samarkand.

Since its inception, the museum has become a centre of scientific thought and education. The exhibits of the museum dating back to Timurid era are of great historical value and for an Indian they are relatable with our history and culture almost intertwined since Babur came to India.

In the museum there are also archaeological, ethnographic and numismatic materials and ornaments of Amir Timur era transported through the Great Silk Road. A replica of the Taj Mahal would also hold an Indian’s interest in this museum 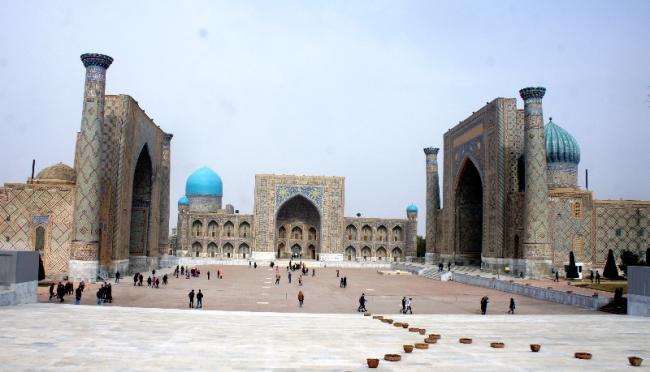 But the real splendor of the country begins when you make a two hours’ bullet train journey from Tashkent to Samarkand, the ancient city which is often referred to as the diamond of Central Asia.

Founded in 742 BC, writers and poets paid glowing tributes to Samarkand with epithets like “Eden of the Ancient East”, “The City of Allah”, “The Pearl of the Eastern Muslim World”, “The Face of the Earth”, etc. 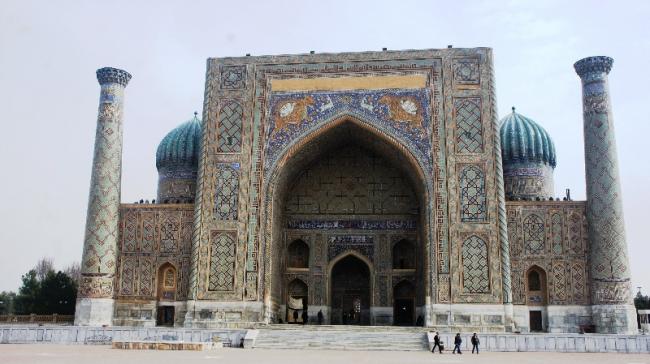 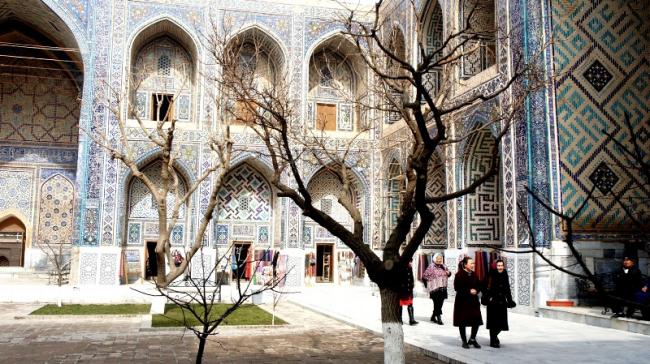 The earliest mention of Samarkand, since ancient times known as Marakanda, is found in the descriptions of the conquests of Alexander the Great (329 BC). Alexander described Samarkand as: “Everything I heard about the beauties of Samarkand is all true, except that it is more beautiful than I could imagine.”

In different periods the city was influenced by Persians, Seleucids, Arabs and Mongols. In the 14th century, the city was the capital of the empire of Timur and its dynasty.

From every successful expedition to India, Afghanistan, Iran, Syria, Turkey, and Transcaucasia, Timur brought to Samarkand the most skilfull architects, jewellers and scientists. The rulers of the European states considered it an honor to visit Samarkand. 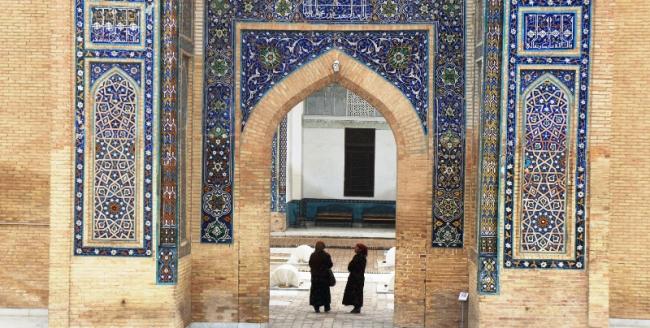 Image: Gur-e-Emir is where the tomb of Timur and other Timurid rulers are located

It is in Samarkand that you see an explosion of Islamic architecture under the Timurid dynasty. In the heart of the modern city of Samarkand is this public square called the Registan which was the crowning glory of the city under the  Timurids. Registan means “Sandy place” or “desert” in Persian. 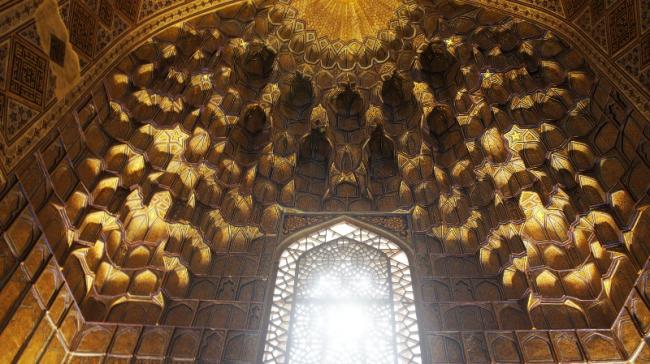 Image: Gur-e-Emir hosts some of the amazing works of deep niches and gilded panels. 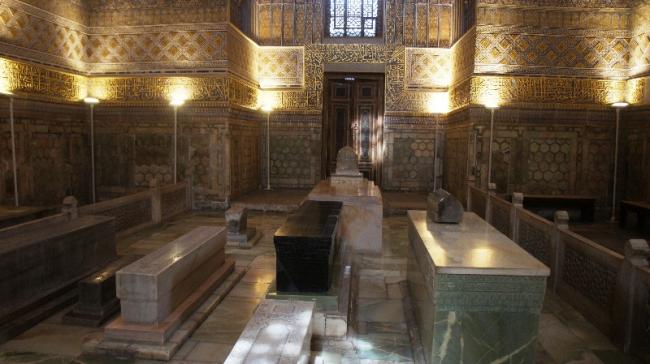 It is here that in Timurid era people would gather to hear royal proclamations, heralded by blasts on enormous copper pipes called dzharchis. It was also a place of public executions. Registan is framed by three splendid, tilting madrasahs (Islamic schools) of distinctive Islamic architecture. The three madrasahs  are the Ulughbek Beg Madrasah (1417–1420), the Tilya-Kori Madrasah (1646–1660) and the Sherdor Madrasah (1619–1636).

The works of majolica and azure mosaics of these buildings form the centrepiece of the city. This UNESCO World Heritage complex  with its azure glistening cupolas (domes), ornate portals and patterned minarets overwhelm you as you walk into the grand public expanse. No wonder that British India viceroy George Curzon had described Registan as “the noblest public square in the world”.

Under Ulugbek, Samarkand also became one of the world’s scientific centres. There was a whole scientific school, uniting  astronomers and mathematicians. In 1428, the  Ulugbek Observatory was built, the key instrument of which was a wall quadrant in partly underground section with a radius of 40 meters and a working part from 20 ° to 80 °, used to chart movements of celestial bodies across the sky. 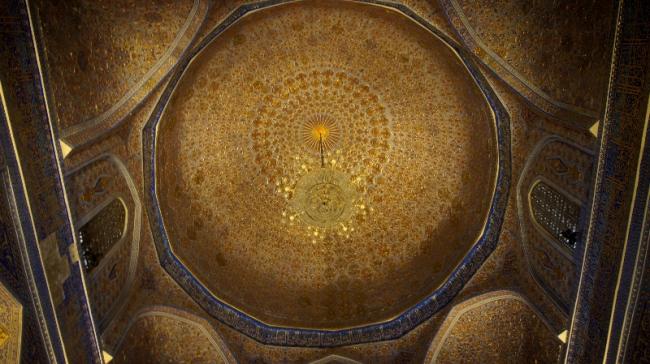 The history of the city is closely connected with the names of great poets, philosophers and scholars like Ibn Sina, al-Biruni, Rumi, Rudaki, Omar Khayyam, Jami, Navoi, Babur and Ali-Kushchi.

Aged over 2750 years Samarkand was the most important point on the Great Silk Road between China and Europe.

If you go dizzy viewing the grandeur and scale of Registan, then pause and head for the the mausoleum of Gur-e Emir (Timur).

This building was laid by the grandson of Timur – Muhammad-Sultan- as a madrasah in 1401. However, Muhammad-Sultan died prematurely, returning from the campaign to Asia Minor. So his madrasah was rebuilt by the order of Amir Timur himself, and Muhammad-Sultan was buried there.

Famous historian Temur Sharaf al-Din Ali Yazdi wrote that “the dome of this building was high, like the sky, the lower parts of the building were decorated with gilded and turquoise patterns in marble.” Yes, you see all that in amazement when you visit there.

Once you are inside the mausoleum’s high chamber where the tombs are, you are left spellbound by the intricate, ornamental and gilded works and panels. The deep niches, paintings, arches and ornate carved headstones leave you in awe of its creators. Here you see the beautiful Muqarnas or ornamented vaulting that characterises Islamic architecture.

Later (1405), Amir Timur himself was buried here. During the reign of Ulugbek on the orders of his father Shahrukh Mirzo (son of Amir Temur), the building was finally completed and turned into a mausoleum of the Temurids.

Not to be missed is another architectural high point of Samarkand that is Bibi-Khanum mosque that  Tamerlane’s favorite wife Bibi-Khanum had built in honor of his return from a trip to India. She wanted it to be the most grandiose creation of Samarkand. 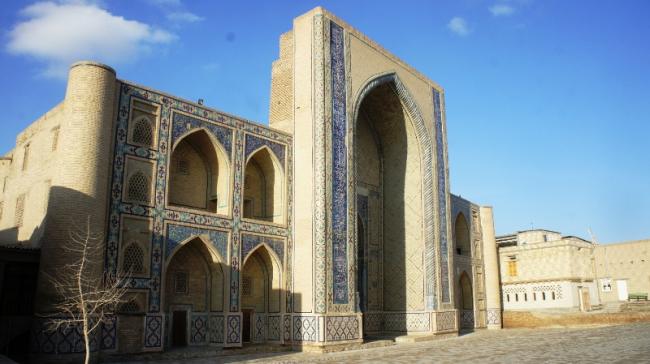 Image: Poi Kalyan (“the foot of the Great Minaret”) is an architectural ensemble centered around the Kalyan Minaret, the majestic Kalyan mosque and the Mir-i Arab Madrassah

If Samarkand leaves you breathless with its beautiful monuments and architecture, then hold your breath till you are in Bukhara, the museum-city where every building, alley and brick breathes history. There are some 140 centuries-old monuments in Bukhara with its historical centre included in the UNESCO World Heritage List. 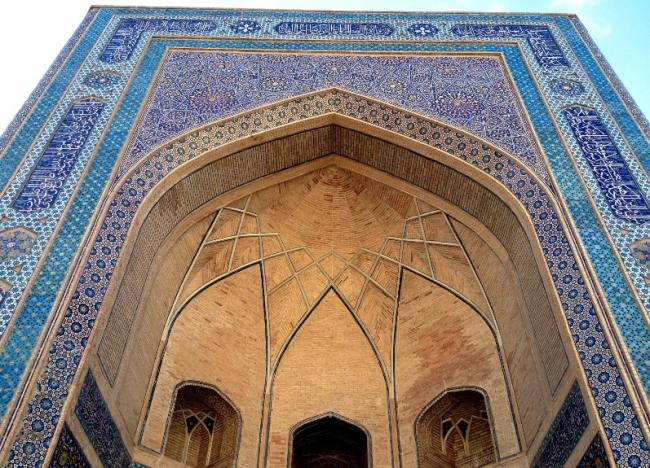 Bukhara’s history dates back to more than 2500 years. According to legend, the city was founded by the Persian prince Siyavush, to whom the vassal state was handed over as a wedding gift by the ruler of Samarkand Afrasiab. In the center of the state was erected a fortress “Ark”, which was surrounded by settlements of artisans.

At one time, the city obeyed Alexander the Great, later the Arab conquerors and was subjected to destruction by Genghis Khan. In 1370 Bukhara became part of the empire of Timur. 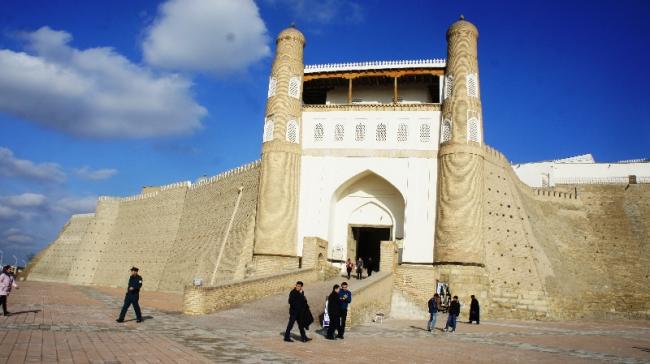 The city was the largest trade centre on the Great Silk Road . In the caravan-sheds, merchants from different countries stopped for rest.

Bukhara reached its peak at the end of the 16th century, during the reign of the Sheibanid  and Ashtarkhanid dynasties. 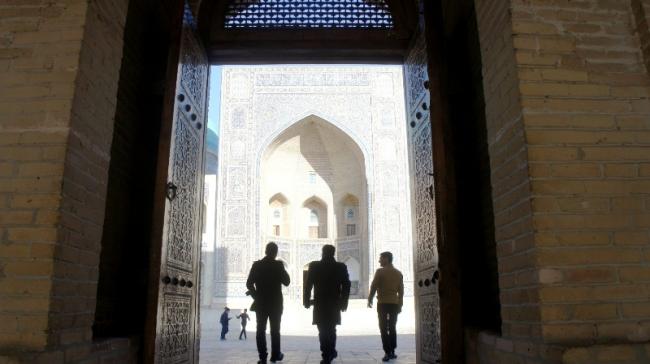 A visit to Bukhara is also about soaking in the beauty of Poi Kalyan (“the foot of the Great Minaret”), an architectural ensemble centered around the Kalyan Minaret built by Arslan Khan (1127 – 1129) and consisting of the majestic  Kalyan mosque (founded in the 12th century, rebuilt in the 15th and early 16th centuries) and the Mir-i Arab Madrassah  (1527-1536). Poi Kalyan is located in the centre of Shahristan (Inner City) of Bukhara.

At the initiative of late President Islam Karimov, the complex was completely restored. 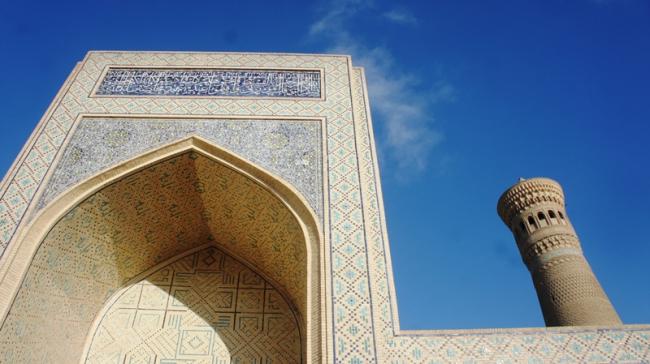 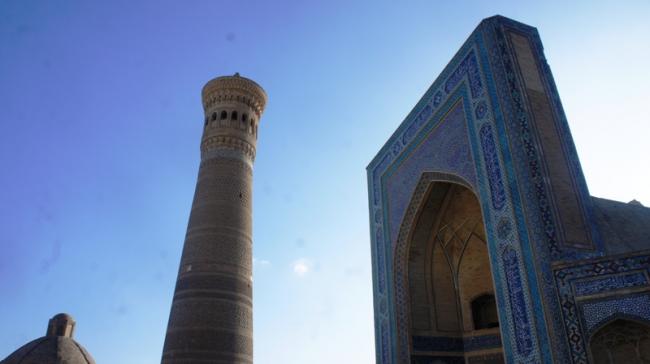 Image: Poi Kalyan (“the foot of the Great Minaret”) is an architectural ensemble centered around the Kalyan Minaret, the majestic Kalyan mosque and the Mir-i Arab Madrassah

And what an inexorable journey of Islamic craftsmanship it is for a visitor to be here to see all that survived and rebuilt after destruction by Genghis Khan. Kalyan Mosque with its beautiful tiled work and the sprawling courtyard is simply spectacular.

The Kalon or Kalyan Minaret (kalon meaning great in Persian) was said to be the tallest  in Central Asia during those days standing 47m tall with 10m-deep quake proof foundation that even Genghis Khan spared as he destroyed rest of the city.  The Minaret  is the only structure of this complex, which was kept safe during the siege laid by Genghis Khan.

The body of the minaret which also used glazed blue tiles is topped by a rotunda with 16 arched fenestrations, from which the muezzins summoned the Muslims in the city to prayer. There is a brick spiral staircase that twists up inside around the pillar to the rotunda.

However, not much is known about the beautiful Mir-i Arab Madrasah origin in this complex. It is marked by stone mosaics work with geometric, vegetative and calligraphic writings and patterns. The construction of Mir-i-Arab Madrasah is ascribed to Sheikh Abdullah Yamani of Yemen, the spiritual mentor of early Shaybanids.

On a late end winter afternoon as the sun was mellowing down, it was almost otherworldly to be standing at the complex in amazement wondering what it took to create such a beautiful mosques, such gypsum works, wood carvings, massive blue cupolas and patterned minarets.